Meadow Court Farm, which has a herd of 155 cows and covers more than 700 vergees of land, was acquired in December 2021 by the Mallard family, who are not strangers to agriculture, already owning and managing two farms and a vineyard in France.

The new owners have appointed an experienced farm manager, Andrew Eastabrook, to oversee Meadow Court Farm and they are very grateful that he will be supported by long-serving staff members, Tony Vile and Graeme White. Tony has worked at Meadow Court for over 35 years and Graeme for eight years.

The farm was established by now-retired farmer Ray Watts in the early 1970s and has been owned by the Watts family until December 2021. Most recently it was run by Ray's son, James.

Mr Mallard said the transition had gone reasonably smoothly, encouraging the family to quickly become immersed in local farming life. As well as providing milk to the Dairy, they are focussing on improving the herd's genetics and will continue to farm in a sensitive and sustainable way.

"After an intensive handover period, James Watts left the island in February this year. Tony and Graeme know the farm inside out, and their experience, together with the ongoing presence of Ray Watts, will help us move forward and maintain the local dairy traditions and the important role of protecting the island's countryside," he said.

Mr Eastabrook brings with him a great deal of experience of the iconic Guernsey breed. His love for farming was nurtured at a young age after spending most of his school holidays helping on local dairy, beef, pig, sheep and arable farms in Surrey. After graduating from Newcastle University with a bachelor's degree in Agriculture with honours in Animal Science, he secured a Dairy Management Trainee role on a farm in Buckinghamshire looking after a 500-strong herd of Holstein-Friesians, before managing the Brymor herd of Guernseys in North Yorkshire

His most recent post was at Hartpury University & College in Gloucestershire where he spent the last five years setting up and managing a commercial herd of Guernseys. During this time, he undertook genomic testing, alongside other enterprises, of the entire herd, being the first UK herd to do so.

Mr Mallard said; "We are now in times when fewer farms are being passed down from generation to generation, opening the door for new farmers coming from varied backgrounds. Agricultural colleges now prepare young farmers as business managers."

"It is good to have young people coming into the agricultural profession from different walks of life and not necessarily from an agricultural family. Having developed an early passion for farming, Andrew has become highly knowledgeable and experienced in agricultural practice, but also with a business viewpoint."

Mr Eastabrook said protecting the island's green fields and hedgerows and enhancing the natural environment was a key part of land management.

"Protecting and nurturing its traditional farming heritage and the iconic Guernsey cattle breed are all central to what we do. We plan to spend a lot of time on land management, which will include tree planting, hedge gapping and continuing with environmental strips and cover crops to help the enrichment of the environment," he said.

"It is so rewarding to see young people coming into the agricultural business," said Mr Mallard. "Farmers of the future are the principal actors of agricultural land management, the essential profession to cope with climate change."

Guernsey Dairy's Managing Director, Andrew Tabel said; "The Mallards have a wealth of farming experience and their contribution, along with Andrew Eastabrook's technical expertise, is a welcome addition to the local farming community complementing what is already a highly respected industry." 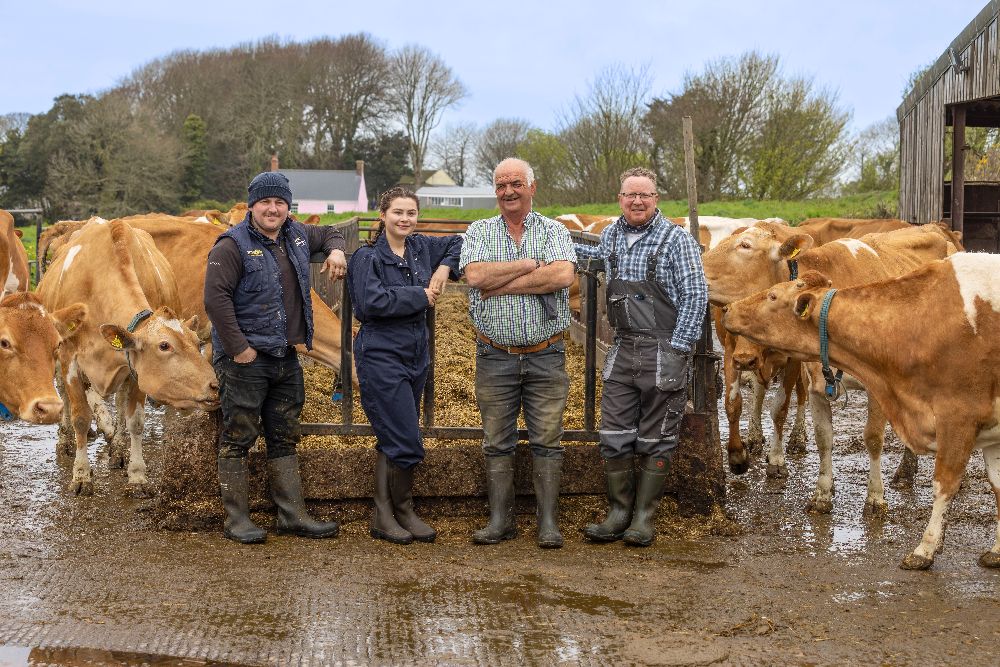