The energy of youth

The energy of youth

Guernsey's dairy farming industry is evolving with a new generation of enthusiastic custodians of the world famous Guernsey breed of cow. The island currently has 13 dairy farms which are responsible for half the island's natural habitat and 1400 cows producing approximately eight million litres of milk a year.

"Most of our farms are now run or supported by what we might term 'young farmers'. Many of us found the bug either as part of a farming dynasty or simply by having a passion for it from a young age," said Chair of the Guernsey Farmers Association, Michael Bray.

Mr Bray is one of the young generation of Guernsey farmers bringing innovation and business acumen that he developed farming in New Zealand and the UK. Mr Bray now runs Les Jaonnets Farm which was part of the Martel family and his pedigree Guernsey herd was once ranked the highest in the UK for their milk yield.

Michael has been keen to uphold the reputation whilst adding innovative practices such as installing technology to allow rotational grazing so that the cows can be outside more, which has improved their nutrition. He has also re-seeded fields to introduce more grass varieties to the diets.

Echoing Michael's beliefs are Guernsey's youngest farmers such as Robin and Rachel Le Cocq, whose father Jeremy has been farming in Guernsey for 50 years. He is now passing on his wisdom and herd to his son and daughter whose dairy management  skills complement each other perfectly.  Robin, a Guernsey Rugby regular is not only a land management enthusiast but analytical about how the farm should operate and Rachel's prowess comes with skilfully managing the herd.

"There are plenty of things we are doing on island as the new generation of farmers seek to set the highest standards possible. We are looking to be even more precise in the way we farm, by improving feed efficiency, waste management and soil structures. There are also opportunities to increase carbon storage and renewable energy on farms," said Robin Le Cocq.

Mr Le Cocq passionately believes Guernsey is already playing a big part in what is termed 'carbon sequestration'.  This is the ability of plants and soils to absorb significant amounts of carbon from the atmosphere.  This potentially puts farming at the forefront of the fight against climate change.

"Much of the plant species that commonly occur on local farms in hedges, woodlands, our meadows and permanent pastures are already capturing carbon at very significant levels. But with some careful management this can be improved to maximise the rate at which carbon sequestration occurs. Furthermore, more biomass usually equates to better habitat for wildlife, particularly insects and birds," said Mr Le Cocq.

According to Mr Le Cocq, soil is his most important asset and his own is continually gaining in organic matter. "As well as aiding carbon sequestration, the increases in organic matter leads to improved soil fertility and structure, and healthier crops," said Mr Le Cocq.

Robin's sister Rachel is also a champion for local farming and a proactive member of the Guernsey Farmers Association (GFA). She believes the industry is an essential part of island life.

"Guernsey farmers are 'custodians of the countryside'.  We are all part of the Guernsey Countryside Management Scheme, which was created to improve wildlife, animal welfare and environmental protection aspects of the farming industry. All our farmers also share a commitment to our special cattle breed, the 'Guernseys', and to the community, and producing fantastic milk whilst at the same time bringing something different to the industry," said Rachel.

Rachel has also witnessed a strengthening in collaboration between farmers to share best practice. She believes consumers are more informed than ever about the value of Guernsey milk and associated dairy products.

"I think we all now understand how vital it is to protect our breed, biodiversity and how together we must step up to deliver climate-friendly food for our community."

"Price will always be a factor in the choices consumers make, but they are also increasingly making choices based on other factors. If we look at some of the fastest growing food brands, providing the most value added for both consumers and producers, then it is being able to provide certainty over origins, traceability of ingredients, integrity in production and a distinctiveness in taste which matter more and more.  Guernsey Dairy's produce is the epitome of these consumer demands," said Rachel.

"The GFA is currently very active and meets regularly to discuss many topics. The age demographic is broad with enthusiastic participation from the very youngest members such as Simon Cowley and those within a farming dynasty such as the Watts, De Garis and Naftel families providing great guidance and advice,"  she said.

As this new generation of young farmers strives to ensure the famous local breed continues, there is one message they are keen to impart.  It is that building on the strong local farming traditions by embracing new technology and best practice will ensure a positive future for farming in Guernsey, and by doing so will be benefit the whole island. 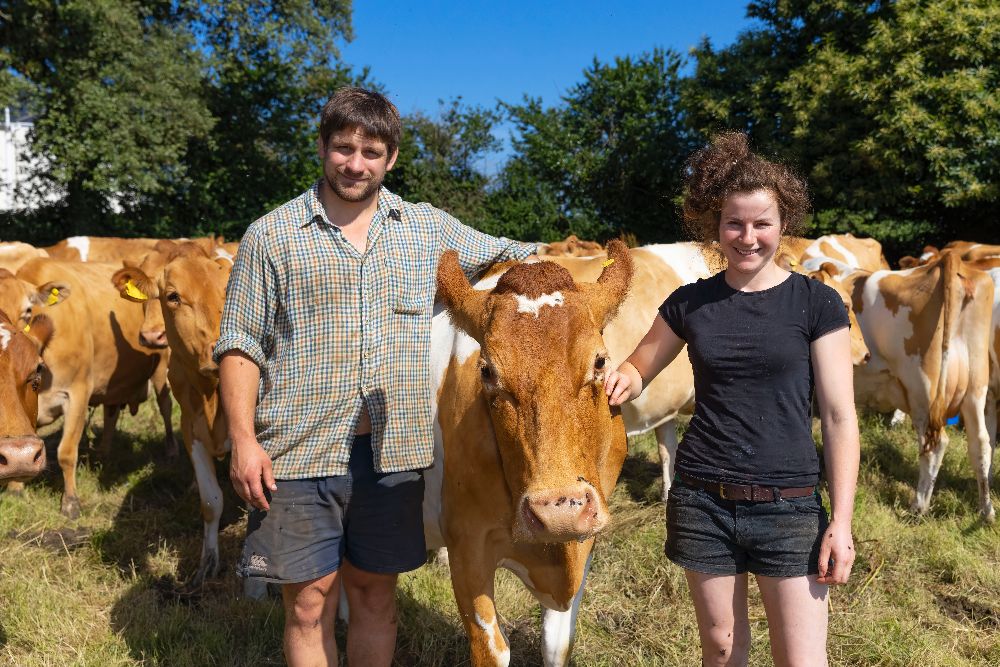